hich is the process of converting ordinary information (plaintext) into unintelligible gibberish (i.e., ciphertext). Decryption is the reverse, in other words, moving from the unintelligible ciphertext back to plaintext. A cipher (or cypher) is a pair of algorithms which create the encryption and the reversing decryption. The detailed operation of a cipher is controlled both by the algorithm and in each instance by a key. This is a secret parameter (ideally known only to the communicants) for a specific message exchange context. Keys are important, as ciphers without variable keys can be trivially broken with only the knowledge of the cipher used and are therefore less than useful for most purposes. Historically, ciphers were often used directly for encryption or decryption without additional procedures such as authentication or integrity checks.

In colloquial use, the term "code" is often used to mean any method of encryption or concealment of meaning. However, in cryptography, code has a more specific meaning. It means the replacement of a unit of plaintext (i.e., a meaningful word or phrase) with a code word (for example, apple pie replaces attack at dawn). Codes are no longer used in serious cryptography—except incidentally for such things as unit designations (e.g., Bronco Flight or Operation Overlord) —- since properly chosen ciphers are both more practical and more secure than even the best codes and also are better adapted to computers.

The study of characteristics of languages which have some application in cryptography (or cryptology), i.e. frequency data, letter combinations, universal patterns, etc. is called cryptolinguistics.

History of cryptography and cryptanalysis

Before the modern era, cryptography was concerned solely with message confidentiality (i.e., encryption) — conversion of messages from a comprehensible form into an incomprehensible one and back again at the other end, rendering it unreadable by interceptors or eavesdroppers without secret knowledge (namely the key needed for decryption of that message). Encryption was used to (attempt to) ensure secrecy in communications, such as those of spies, military leaders, and diplomats. In recent decades, the field has expanded beyond confidentiality concerns to include techniques for message integrity checking, sender/receiver identity authentication, digital signatures, interactive proofs and secure computation, among others.

The modern field of cryptography can be divided into several areas of study. The chief ones are discussed here; see Topics in Cryptography for more.

Symmetric-key cryptography
Symmetric-key cryptography refers to encryption methods in which both the sender and receiver share the same key (or, less commonly, in which their keys are different, but related in an easily computable way). This was the only kind of encryption publicly known until June 1976.[9]One round (out of 8.5) of the patented IDEA cipher, used in some versions of PGP for high-speed encryption of, for instance, e-mail 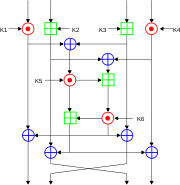 The modern study of symmetric-key ciphers relates mainly to the study of block ciphers and stream ciphers and to their applications. A block cipher is, in a sense, a modern embodiment of Alberti's polyalphabetic cipher: block ciphers take as input a block of plaintext and a key, and output a block of ciphertext of the same size. Since messages are almost always longer than a single block, some method of knitting together successive blocks is required. Several have been developed, some with better security in one aspect or another than others. They are the modes of operation and must be carefully considered when using a block cipher in a cryptosystem.

The Data Encryption Standard (DES) and the Advanced Encryption Standard (AES) are block cipher designs which have been designated cryptography standards by the US government (though DES's designation was finally withdrawn after the AES was adopted). Despite its deprecation as an official standard, DES (especially its still-approved and much more secure triple-DES variant) remains quite popular; it is used across a wide range of applications, from ATM encryption to e-mail privacy and secure remote access. Many other block ciphers have been designed and released, with considerable variation in quality. Many have been thoroughly broken. See Category:Block ciphers.
Stream ciphers, in contrast to the 'block' type, create an arbitrarily long stream of key material, which is combined with the plaintext bit-by-bit or character-by-character, somewhat like the one-time pad. In a stream cipher, the output stream is created based on a hidden internal state which changes as the cipher operates. That internal state is initially set up using the secret key material. RC4 is a widely used stream cipher; see Category:Stream ciphers. Block ciphers can be used as stream ciphers; see Block cipher modes of operation.

Cryptographic hash functions are a third type of cryptographic algorithm. They take a message of any length as input, and output a short, fixed length hash which can be used in (for example) a digital signature. For good hash functions, an attacker cannot find two messages that produce the same hash. MD4 is a long-used hash function which is now broken; MD5, a strengthened variant of MD4, is also widely used but broken in practice. The U.S. National Security Agency developed the Secure Hash Algorithm series of MD5-like hash functions: SHA-0 was a flawed algorithm that the agency withdrew; SHA-1 is widely deployed and more secure than MD5, but cryptanalysts have identified attacks against it; the SHA-2 family improves on SHA-1, but it isn't yet widely deployed, and the U.S. standards authority thought it "prudent" from a security perspective to develop a new standard to "significantly improve the robustness of NIST's overall hash algorithm toolkit. Thus, a hash function design competition is underway and meant to select a new U.S. national standard, to be called SHA-3, by 2012.

Message authentication codes (MACs) are much like cryptographic hash functions, except that a secret key is used to authenticate the hash value on receipt.

Symmetric-key cryptosystems use the same key for encryption and decryption of a message, though a message or group of messages may have a different key than others. A significant disadvantage of symmetric ciphers is the key management necessary to use them securely. Each distinct pair of communicating parties must, ideally, share a different key, and perhaps each ciphertext exchanged as well. The number of keys required increases as the square of the number of network members, which very quickly requires complex key management schemes to keep them all straight and secret. The difficulty of securely establishing a secret key between two communicating parties, when a secure channel doesn't already exist between them, also presents a chicken-and-egg problem which is a considerable practical obstacle for cryptography users in the real world.

Whitfield Diffie and Martin Hellman, authors of the first published paper on public-key cryptography
In a groundbreaking 1976 paper, Whitfield Diffie and Martin Hellman proposed the notion of public-key (also, more generally, called asymmetric key) cryptography in which two different but mathematically related keys are used — a public key and a private key. A public key system is so constructed that calculation of one key (the 'private key') is computationally infeasible from the other (the 'public key'), even though they are necessarily related. Instead, both keys are generated secretly, as an interrelated pair. The historian David Kahn described public-key cryptography as "the most revolutionary new concept in the field since polyalphabetic substitution emerged in the Renaissance".

In public-key cryptosystems, the public key may be freely distributed, while its paired private key must remain secret. The public key is typically used for encryption, while the private or secret key is used for decryption. Diffie and Hellman showed that public-key cryptography was possible by presenting the Diffie-Hellman key exchange protocol.

In 1997, it finally became publicly known that asymmetric key cryptography had been invented
by James H. Ellis at GCHQ, a British intelligence organization, and that, in the early 1970s, both the Diffie-Hellman and RSA algorithms had been previously developed (by Malcolm J. Williamson and Clifford Cocks, respectively). The Diffie-Hellman and RSA algorithms, in addition to being the first publicly known examples of high quality public-key algorithms, have been among the most widely used. Others include the Cramer-Shoup cryptosystem, ElGamal encryption, and various elliptic curve techniques. See Category:Asymmetric-key cryptosystems.

Padlock icon from the Firefox Web browser, meant to indicate a page has been sent in SSL or TLS-encrypted protected form. However, such an icon is not a guarantee of security; any subverted browser might mislead a user by displaying such an icon when a transmission is not actually being protected by SSL or TLS.

Public-key algorithms are most often based on the computational complexity of "hard" problems, often from number theory. For example, the hardness of RSA is related to the integer factorization problem, while Diffie-Hellman and DSA are related to the discrete logarithm problem. More recently, elliptic curve cryptography has developed in which security is based on number theoretic problems involving elliptic curves. Because of the difficulty of the underlying problems, most public-key algorithms involve operations such as modular multiplication and exponentiation, which are much more computationally expensive than the techniques used in most block ciphers, especially with typical key sizes. As a result, public-key cryptosystems are commonly hybrid cryptosystems, in which a fast high-quality symmetric-key encryption algorithm is used for the message itself, while the relevant symmetric key is sent with the message, but encrypted using a public-key algorithm. Similarly, hybrid signature schemes are often used, in which a cryptographic hash function is computed, and only the resulting hash is digitally signed.
Share on: Facebook Twitter Linkedin Technorati Digg