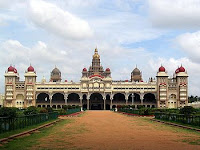 The Palace of Mysore is a palace situated in the city of Mysore, southern India. It is the official residence of Wodeyar's -the erstwhile royal family of Mysore, and also houses Two durbar halls (ceremonial meeting hall of the royal court).

Mysore has a number of historic palaces, and is commonly described as the City of Palaces. However, the term "Mysore Palace" specifically refers to one of within the old fort. The palace was commissioned in 1897, and its construction was completed in 1912. It is now one of the most famous tourist attractions in Mysore.

India in 1947.The Wodeyar kings built a palace in Mysore in the 14th century, But the Raja Wodeyar shifted his Capital to the island fort town of Sriranagapatna in 1610 and Mysore lost its importance as a seat of power. But this palace was partially damaged by a lightning strike in 1638. It was repaired and expanded by Ranadhira Kanteerava Narasa Raja Wodeyar. With the usurpation of the Kingdom by the Hyder in 1762 Mysore Palace further lost its importance. But Hyder son , Tipu Sultan demolished the entire fort town including the Palace in 1787 and used the fort material to build a new town near by known as Nazarabad (now part of the mysore City). Fourth Mysore war in 1799 brought an end to the reign of Tipu sultan and then Governor General of India, Lord Mornington ( later Marquis Wellesley and elder brother of Arthur Wellesley - who rose to become Duke of Wellington and is famously known as Iron Duke) decided to restore part of the conquest to the ancient Hindu Royal family and shifted the capital of the newly defined territory of Mysore Kingdom to Mysore. Thus the scion of the Wodeyar, then five year old, Krishna Raja Wodeyar III was crowned as the new King in 1799 in a make shift premises within the destroyed fort. In due course the Nazrabad fort was dismantled an the materiel made its way back in building the Mysore fort once again. A new palace was built in its place by 1803. This palace was destroyed in a fire in 1897 during the wedding of Princess Jayalakshmanni.

The architectural style of the palace is commonly described as Indo-Saracenic, and blends together Hindu, Muslim, Rajput, and Gothic styles of architecture. It is a three-storied stone structure, with marble domes and a 145 ft five-storied tower. The palace is surrounded by a large garden.

The three storied stone building of fine gray granite with deep pink marble domes was designed by Henry Irwin. The facade has seven expansive arches and two smaller ones flanking the central arch, which is supported by tall pillars.

Above the central arch is an impressive sculpture of Gajalakshmi, the goddess of wealth, prosperity, good luck, and abundance with her elephants.

The regent of Mysore, Maharani Vani Vilas Sannidhna, commissioned a British architect, Henry Irwin, to build yet another palace in its place. The construction was completed in year 1912. But slowly the beautification of the fort was also taken up and the inhabitants of the fort were slowly shifted out to newer Extension built outside. The present Public Durbar Hall wing was also added much later around 1940.

Every autumn, the Palace is the venue for the famous Mysore Dasara festival, during which leading artists perform on a stage set up in the palace grounds. On the tenth day of the festival Vijaya Dashami, a parade with caparisoned elephants and other floats originate from the palace grounds.

Dasara is the most extravagant festival of Mysore. The Dasara festival is celebrated in the months of September and October of each year.

The festival celebrates and commemorates the victory of the great goddess Durga, after she slew the demon, Mahishasura, and thereby, symbolizing the triumph of good over evil according to Hindu mythology. Some call her Chamundeshwari.

The palace complex includes twelve Hindu temples. The oldest of these was built in the 14th century, while the most recent was built in 1953.Some of the more famous temples are:

This festival has been celebrated by the Wodeyars at Srirangapatna from 1610 and in Mysore with great pomp from 1799 and the tradition still is carried on although the scale of the celebrations has diminished. The Dasara festivities have become an integral part of the culture and life in Mysore.

To celebrate this festival the Palace of Mysore is illuminated with more than 96,000 lights during that two month period.