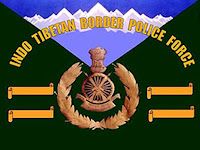 ITBP was conceived on 24 Oct, 1962. Presently ITBP is deployed on Border Guarding Duties from Karakoram Pass in Ladakh to Diphu La in Arunachal Pradesh covering 3488 KM of India-China Border and manning Border Outposts on altitudes ranging from 9000’ to 18500’ in the Western, Middle & Eastern Sector of the India-China Border.TBP is basically a mountain trained Force and most of the officers & men are professionally trained Mountaineers and Skiers. Being the first responder for natural Disaster in the Himalayas, ITBP has been carrying out numerous rescue and relief operations
ITB Police has posted a CISF Recruitment 2010. Indo-Tibetan Border Police has declared Result of Recruitment Of AT/GD 2010.