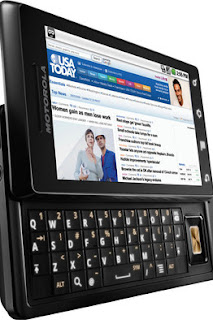 Verizon Wireless customers tend to love the company’s fast 3G network. But many tech-oriented Verizon loyalists gripe about the carrier’s high-end smart phones, which haven’t matched the cachet and versatility of the Apple iPhone sold by AT&T (T). In fact, some Verizon customers have switched to AT&T simply to get an iPhone.

The Droid is also the first phone that runs the 2.0 version of Android, which sands off some of the rough edges of Google’s platform and adds some features—notably, a free voice-prompted turn-by-turn navigation program. Android still isn’t as slick or fluid as the iPhone’s OS, in my view, but it has some functionality Apple (AAPL) omits, including the ability to run multiple third-party apps simultaneously.

The Droid is a handsome, squared-off device with a gorgeous, huge, high-resolution screen, bigger and sharper than the iPhone’s. There’s also a slide-out physical keyboard. It’s only a tad longer and thicker than the Apple product. But it’s 25% heavier, which makes it less comfortable to carry around in a pocket.

The Droid also has a higher-resolution camera than the iPhone’s: five megapixels versus three megapixels. And the camera has a flash, which the Apple lacks. In my tests, pictures came out OK, though not dazzling, and videos I shot were quite good.

The Droid’s large 3.7-inch screen looked great, but it lacks multitouch features, such as two-finger zooming, and it seemed less responsive than some other touch screens I’ve tested.

Battery life is listed at a whopping 6.4 hours, and, in my tests, the Droid easily lasted through the day on a single charge. Phone calls were crisp and clear, and I never suffered a dropped call. Verizon’s network was speedy and reliable for Web surfing, email and social networking. I copied some songs and videos onto the Droid by plugging it into a computer, and all played properly.

The Droid, whose $200 price comes only after a $100 mail-in rebate, requires a minimum $70 monthly service plan for two years, and text messaging costs extra. It comes with 16 gigabytes of memory, in the form of a removable card, and can handle up to a 32-gigabyte card.

Unfortunately for lovers of physical keyboards, I found the one on the Droid to be pretty awful. It has flat, cramped keys that induce too many typing errors, yet lacks auto-correction. I found myself using the virtual on-screen keyboard, which was pretty fast and accurate for me, and did include auto-correction.